As an innovative SME that stands out for its know-how and cross skills, 3P Engineering has developed a unique test protocol to measure the capture efficiency of hoods, downdrafts and induction cooktops with integrated hood. A groundbreaking method that allows hood and hob manufactures to get numerical quantifiable values and the real amount of fumes, odors and pollutants captured by their products, during cooking.

3P Engineering is able to ascertain not only the energy class of conventional hoods and downdrafts (EU 65/2014, IEC/EN 61591), and the performances of the induction hob (EN 60350-2), but also the capture efficiency of cooking fume uptake of the integrated hood, thanks to the special tests that are carried out in its UNI CEI EN ISO/IEC 17025:2018 Testing Laboratory accredited by Accredia (n.1537 L), where international leader brands test their products.
Several benefits for hood and hob manufactures as well as end-users descend by the new Capture Efficiency method that is going to evolve the household appliances market, in order to improve energy efficiency and Indoor Air Quality (IAQ) in kitchens, with lower noise at the same level of energy consumption.

In the past: hoods were classified according to the volumetric airflow (the cubic meter/hour–range).The main parameter used to evaluate range hoods was the power, without exploring the real capacityto prevent the diffusion of vapors, odors and fumes. In addition, more airflow means more noise.
Until today: following the introduction of the Energy Efficiency Label, hoods are compared onthe Efficiency Energy Class. Thus, it is possible to know the hood energy consumption but not theamount of vapors, odors and fumes absorbed by hood, in comparison with smokes and pollutantsthat spreads out in kitchen.
Now: the new method developed by 3P Engineering allows for evaluating the best balance betweenflow rate and noise, as well as the capacity of hoods on preventing the diffusion of vapors and smellsduring cooking, saving energy and guaranteeing IAQ.
Capture Efficiency summarizes the hood’s behavior with regard to the effective elimination of odors, low energy consumption, cleaner and moisture-free air, no gas and particles after cooking, and noiseless functioning. Capture Efficiency testing allows data comparison in order to evaluate the best performances in terms of Indoor Air Quality (IAQ) and Energy Efficiency Ratio (E.E.R.) of range hoods, downdrafts and aspiration hobs. 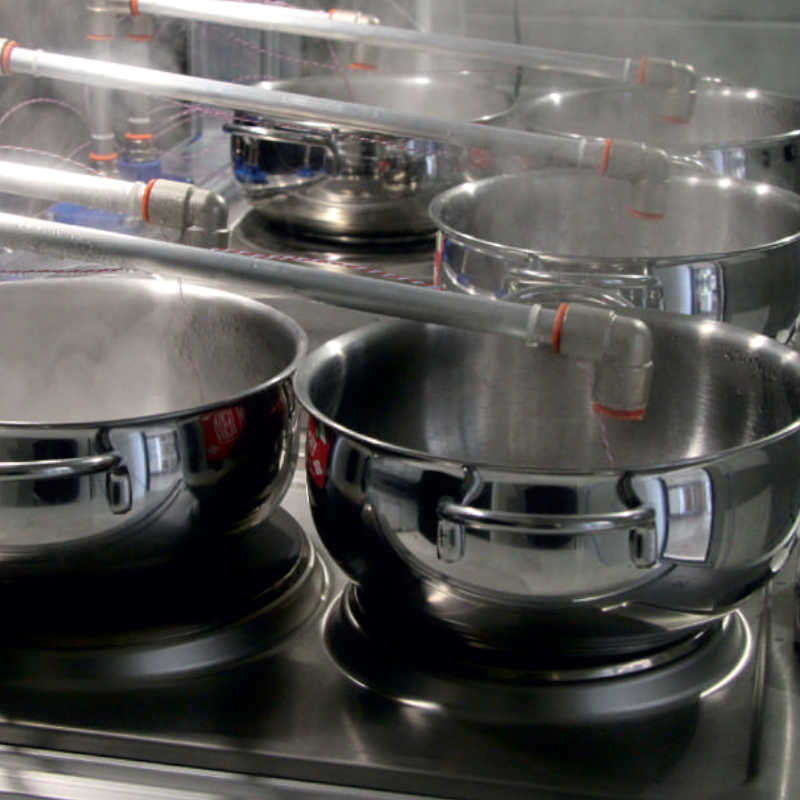 3P Engineering has managed to develop a new test protocol to measure the amount of fumes, vapors and odors generated by cooking, that are captured by hood, based on:

- the real time measurement of tracer gas produced while cooking in “standard kitchen” (EN/IEC 61591) and hobs (EN/IEC 60335-2-31);
- the measurement and control of the air flow of hood;
- the creation of conditions able to reproduce water vapors and fumes boiling water, to get and control the real thermal flow.

The new method for Capture Efficiency 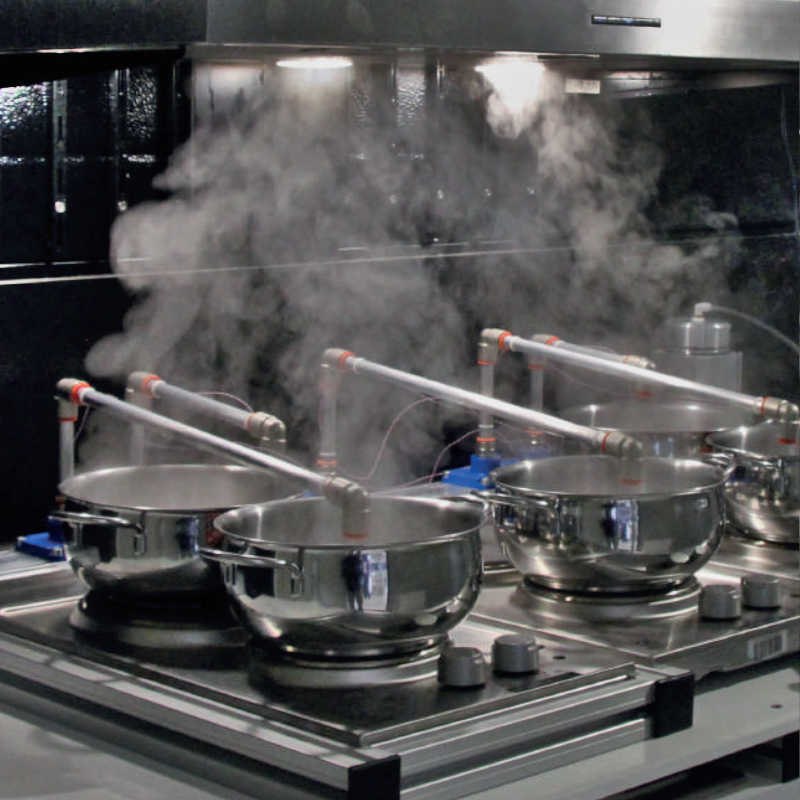 - Assessment of the factors influencing the results and determination of validation parameters
Max repeatability/reproducibility: r = 5%
To evaluate the capacity of hoods/hobs to capture pollutants and odors produced by cooking, the method developed by 3P Engineering, blends visual, instrumental and olfactory procedures. It is so possible to achieve not only information concerning qualitative issues but also quantifiable values, thus guiding manufactures to produce more competitive products, and making end-user able to compare different hood models in the market. 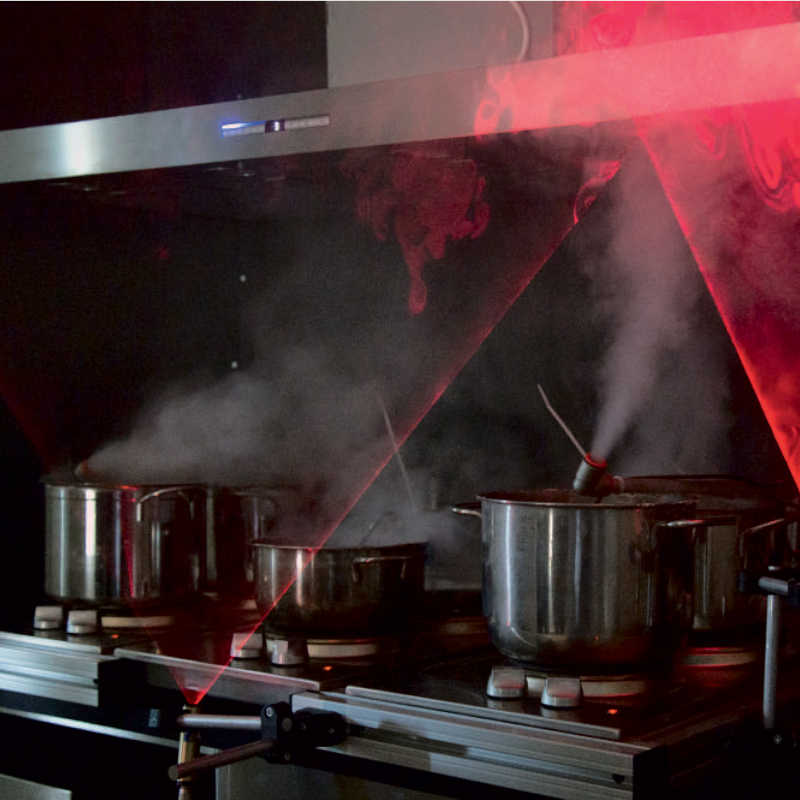 - Visual procedure is based on testing visible smoke using laser. Video recording of the “thermal plume” between hob and hood allows direct comparison among different products in the same conditions.

- Olfactory procedure is based on “smell panel”, using a statistical sample of participants that are different for gender, age, and life habits. They verify the level of odors that are perceived outside the cooking zone through filters connected with the kitchen in the Testing Laboratory of 3P Engineering, assigning a score for each smell evaluation.

Why Capture Efficiency by 3P Engineering 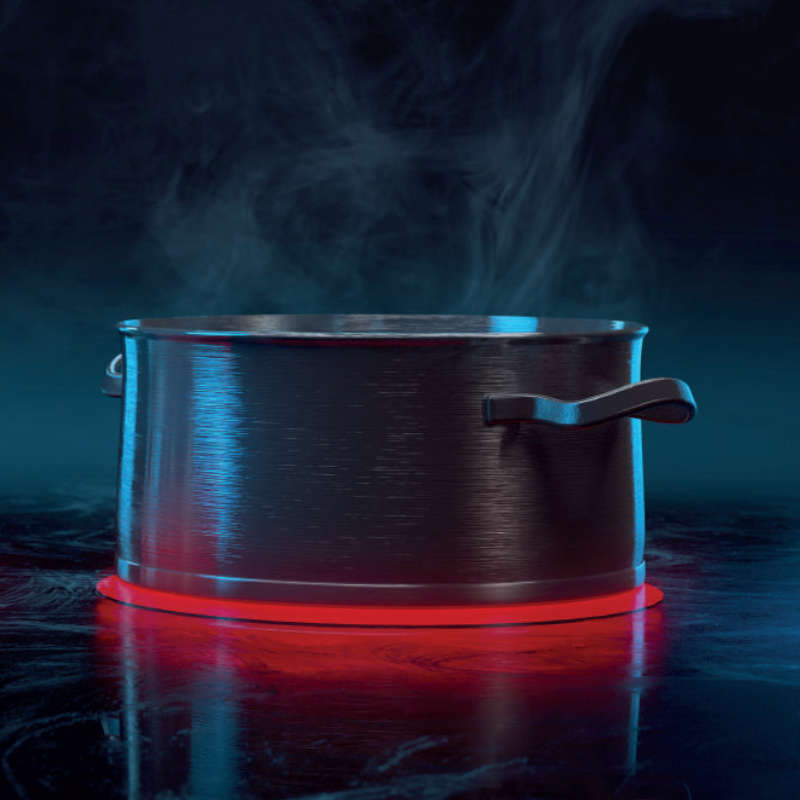 Capture efficiency tests allow to rate a range hood’s behavior with regard to the operating conditions (i.e. kind of the cooktop, hobs thermal power, cooking method, installation height) and the designing features during hood product development (i.e. geometry, the suction areas position and shape, motor). Thanks to the 3P Engineering method, it is possible to get several benefits:
- to guide R&D in order to detect the significant parameters for the range hood’s design and performances, for a better product development;
- to avoid useless noise using hoods suitable for the size of each cooktop: the capture efficiency grows proportionally with the airflow rate but beyond a certain level, an increasing airflow rate doesn’t improve hood efficiency, only intensify noise;
- to combine the appropriate hood model for each hob without oversizing hood blower and wasting energy due to its inadequate power: no energy waste.
Thanks to its advanced competences, 3P Engineering has developed a test protocol for the Capture Efficiency in its independent Testing Laboratory ISO/IEC 17025, that is equipped according to the highest standards and best quality levels. Accredited by Accredia (n.1537 L), the Testing Laboratory of 3P Engineering guarantees that the tests are internationally valid and the precise reference to sampling, analysis and measuring techniques, accuracy, repeatability and technical staff training procedures, with the application of the most rigorous standards and strict verification criteria.. 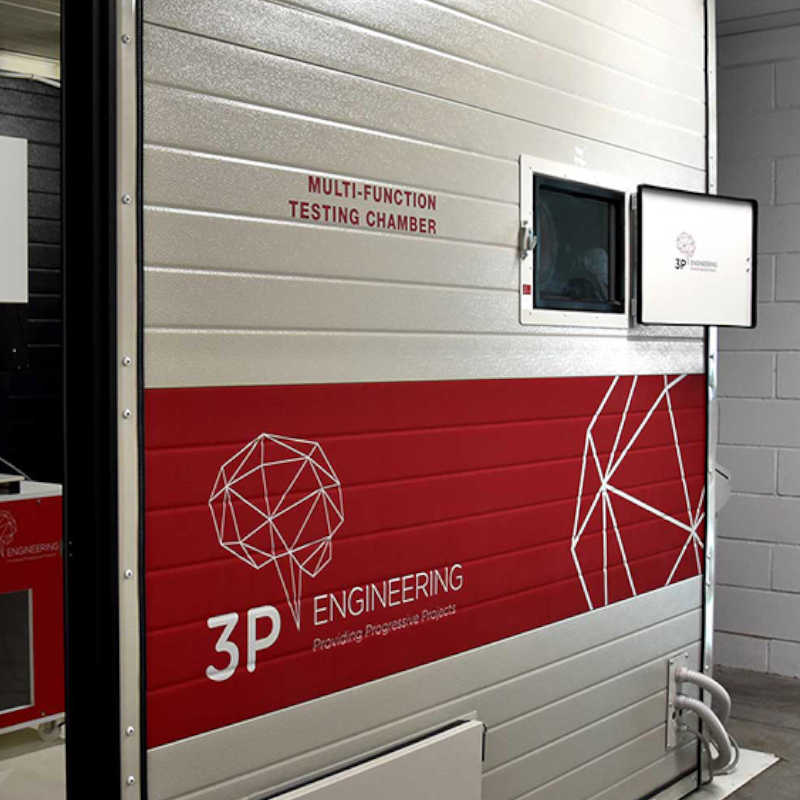 - is an independent laboratory. No conflicts of interest on the analysis carried out and impartiality of the data obtained: complete reliability (according to ILAC-MRA - UNI/EN/ISO/IEC 17025 - General requirements for the competence of testing and calibration laboratories);

- has got the longest and in-depth experience of Capture Efficiency: 16 years of analysis in kitchen hoods and cooktops, providing tests for international leading companies;

- is the unique company in Italy and one of the first laboratories in Europe to be accredited for the measurement of FDE (IEC 61591:1997) to identify the precise class of consumption set in the Energy Efficiency Label.